Yesterday, Microsoft announced the availability of Windows 8 for its customers in Asia Pacific and around the world. Beginning on Friday, October 26, consumers and businesses will be able to experience all that Windows 8 has to offer: a beautiful new user interface available on more than 1,000 Windows 8 certified PCs and tablets, and a wide range of apps with the opening of the Windows Store in 17 markets across Asia Pacific.

Windows 8 will be available for download onto existing PCs in over 140 markets and 37 languages. New devices from a wide range of manufacturers—including Asus, Acer, Dell, Fujitsu, HP, Lenovo, LG, Samsung, Sony and Toshiba—will be available at retail locations throughout Asia Pacific. Customers will be able to choose from a range of new models, including notebooks, tablets, all-in-ones, touch-enabled ultrabooks and convertibles, all built for Windows 8.

“With the launch of Windows 8, Microsoft is unveiling a reimagined Windows to the world,” said Tracey Fellows, President of Microsoft Asia Pacific. “Whether you want to consume or create, whether you want to work or play—Windows 8 delivers a no-compromise computing experience. You no longer need to choose between the fun and convenience of a tablet and the power and productivity of a PC.”

Windows 8 will be available in two versions at retail, Windows 8 and Windows 8 Pro. Launching at the same time is a new member of the Windows family designed for ARM-based tablets, Windows RT, which enables new thin and lightweight form factors with impressive battery life. Windows 8 features the new fast and fluid Start screen that gives people one-click access to the apps and content they care most about, the entirely new Internet Explorer 10 that is perfect for touch, and built-in cloud capabilities with SkyDrive. Other built-in apps include:

More than 30,000 developers have participated at Windows 8 developer events across the region, and some of the most popular local apps in Asia Pacific are now available in the Windows Store: 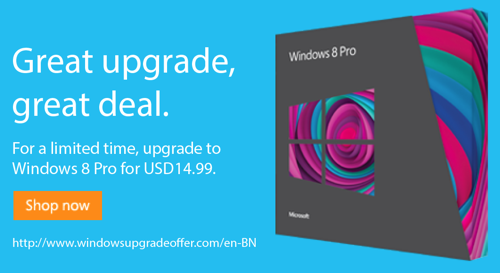