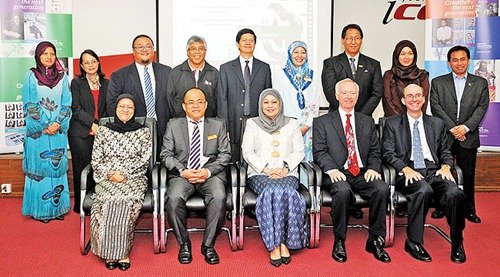 THE winners for the 30-second Infomercial Competition, organised by Brunei Economic Development Board (BEDB) with the support of Telekom Brunei Berhad (TelBru), were announced yesterday in a ceremony which marked World Intellectual Property Day (World IP Day) at the iCentre. 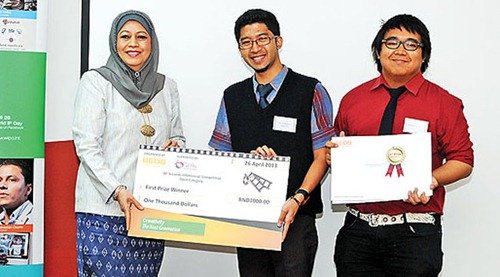 Miguel Rodriguez and Rushmika Perera from St Margaret’s School emerged as the winners of the student category while Mohammad Sahlan Safwan and Farhan Nuradli Abd Karim, students from ITB, were crowned the winners of the open category.

To further ensure that Intellectual Property (IP) protection in Brunei Darussalam is in accordance with the country’s needs and consistent with international standards, last year the Sultanate became part of the Paris Convention and signed the Patent Cooperation Treaty and the Budapest Treaty. His Majesty the Sultan and Yang Di-Pertuan of Brunei Darussalam has also consented for Brunei Darussalam to accede to the Hague Agreement.

The Attorney General’s Chambers and Patent Registry Office are currently working together to review the country’s laws, as well as international conventions and treaties.

Expertise from the WIPO, USPTO, JPO and Asean Secretariat, among others, have also been sought, she said, adding that Brunei is grateful for their assistance, particularly in the areas of human resource development, accession to international treaties, sharing of best practices and raising awareness.

The Attorney General also lauded the efforts of authorities in curbing the selling of counterfeit CDs and DVDs in the country. The Criminal Justice Division (CJD) of the Attorney General’s Chambers has also successfully prosecuted cases in Brunei courts, Datin Seri Paduka Hajah Hayati added.

Earlier, the Attorney General revealed that the process of establishing a national IP office was going well, noting that the first phase of the transfer of the registries – Patent and Industrial Design to the Brunei Economic Development Board (BEDB) – had been completed.

The target for this year is the transfer of registry of trademarks.

In her speech, the Attorney General also stressed on the need to develop a national IP strategy to encourage and facilitate effective creations, development and management of IP.

“During my speech at the opening for the PCT and Budapest System training at The Empire Hotel and Country Club in July last year, I expressed my hope for the BEDB to consider developing a National IP Strategy.

“Why is it important? According to WIPO, an IP strategy is a set of measures formulated and implemented by a government to encourage and facilitate effective creations, development and management of IP.

“It outlines how to develop infrastructures and capacities to support investors of IP to protect, develop and exploit their inventions. It, therefore, spells out how best to develop the talent base for an innovation system that attract foreign direct investments and help in building an inclusive economy. It will be a comprehensive national document, which outlines how all the policy development and implementation take place in a coordinated manner with a national framework.

“I believe that a National IP Strategy and the establishment of a full-fledged IP office will definitely signify a remarkable milestone for the development of IP in Brunei Darussalam especially in realising Wawasan 2035. The AGC pledges its support and assistance, whenever required.”

All pics courtesy of Borneo Bulletin