To mark the introduction of the Baiduri i-Banking mobile app in June 2013, Baiduri Bank launched a 6-month campaign to encourage customers to download the app and utilize it, with attractive prizes to be won. During the campaign, customers were automatically entered into the draw each time they carried out a transaction using the app.

At the end of the campaign, three lucky customers who utilized the app were picked.  They received their prizes at Kiarong Branch recently. Hjh Mashaslinah bte Hj Md Said won a 2 nights stay at Empire Hotel while Ami Shah Ismawandi won an MasterCard CashCard preloaded with B$400 and Muhammad Reeda Malik, the AnakBrunei blogger who was represented by his daughter, won a B$400 AV Electronics gift voucher.  Antonia Jasmine K,  Senior Officer at the Corporate Communications and Marketing Department of Baiduri Bank was on hand to present the prizes.

Since its launch, usage of the app has been increasing as more and more i-banking customers move to the mobile version because it is portable, making managing of their personal funds very convenient. As one of the delighted winners explained, “The mobile banking app is very convenient and easy to use”.

The Baiduri Personal i-Banking app first made its debut in the market on 25th of June 2013 and was developed as part of Baiduri’s initiatives to continuously improve customer experience.  Packed with existing i-Banking features, the app is available for download on App Store and Google Play at no charge. Customers can safely use this app while overseas because the app utilises the mobile or token authentication just like the existing i-Banking.

More information on the latest Baiduri mobile app can be obtained via the Baiduri Call Centre at 244 9666 or online at www.baiduri.com. 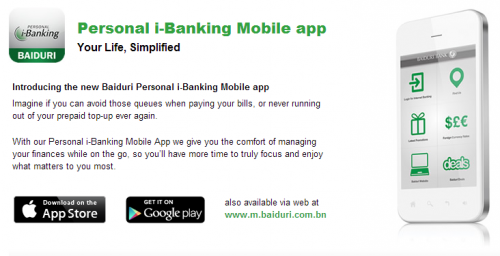