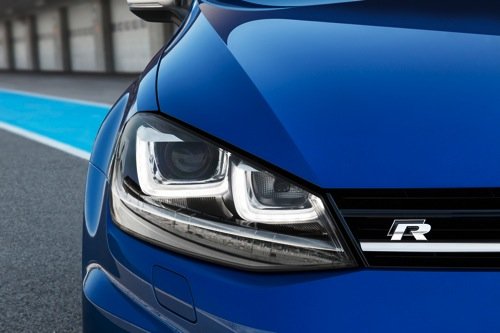 Following up on the success of the seventh­ generation Golf, the new Golf R is powered by a newly designed 280 bhp TSI engine, which is 24 bhp stronger but more than 15 percent more fuel efficient than that in the previous model.

Like all three previous Golf R models, the new model also transfers its turbocharged  engine power to the road via a permanent all-wheel drive system; in this case, it is the latest version of the 4MOTION system with a fifth-generation Haldex coupling.

The Golf R completes the 0-100 km/h sprint in just 5.0 seconds and reaches an electronically limited top speed of 250 km/h. Despite the car’s exceptionally agile driving performance and extra power, fuel consumption has been reduced from 8.4 to 7.1/100km. C02 emissions were also improved from 195 to 164 g/km.

The new Golf R is equipped with an extensive package of customised and exclusive features. Along with specially designed bumpers, side sills and18-inch alloy wheels, the car can also be visually distinguished  as an impressive sports model by details such as bi-xenon headlights with newly designed LED daytime running lights (in dual-u design), dark red LED rear lights and a two-branch exhaust system with four chrome tailpipes.

Inside, the Golf R underlines its position as the flagship of the model range with sport seats in Vienna leather upholstery, a leather trimmed three-spoke  sport steering wheel, a 320 km/h speedometer, blue ambience lighting, and a navigation system with an 8-inch touchscreen. 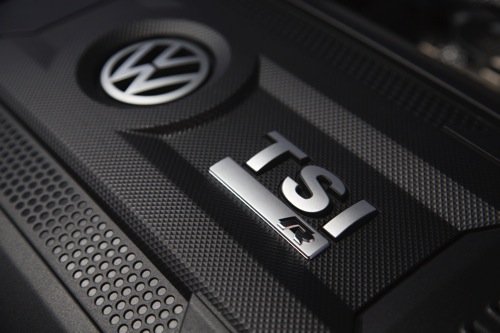 Like the current Golf GTI, the Golf R is powered by further advanced engine design of the four cylinder EA888 engine series. Compared to the previous engine, numerous technical details were modified to reduce fuel consumption and emissions and at the same time to increase power and torque values.

The engine has a newly designed cylinder head with four valves per cylinder, for example. Compared to the 220 bhp Golf GTI, designers boosted engine power of the Golf R to 280 bhp, creating one of the most powerful four-cylinder engines. Maximum torque has increased 30 Nm to380 Newton metres; it is available over a broad speed range from 1,750 to 5,600 rpm.

To attain these values, the TSI, with a displacement  of 1,984 cc, was subjected to a development programme similar to that of a motorsport engine. The following components were modified or completely redesigned compared to the already highly agile GTI engine: the cylinder head (together with exhaust valves, valve seats and springs), pistons, high-pressure injection valves as well as the turbocharger. 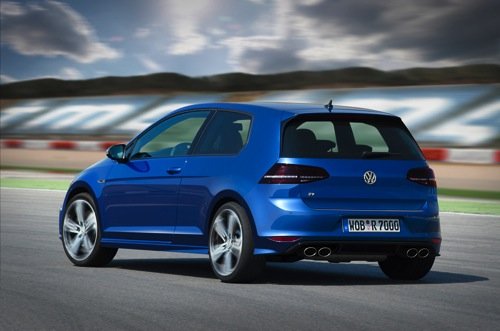 Permanent 4MOTION all-wheel drive has always been a trait of theGolf R. The latest generation 4MOTION system is now being used in the fourth-generation Golf R. This all-wheel drive system is coupled with a 6- speed dual-clutch gearbox (DSG) that also offers manual shifting as an alternative.

The 4MOTION all-wheel drive system of the Golf R, further perfected by enhancements  such as the Haldex 5 coupling, is activated even before any wheel starts to slip. This eliminates nearly all traction losses. The system achieves this by using an advanced control function based on specific driving conditions.

The wheels of the Golf R are prevented from spinning even when driving off and accelerating, because the control unit regulates the torque distribution as a function of dynamic axle loads. Activation of the Haldex 5 coupling is based primarily on the engine torque demanded  by the driver. In parallel, a driving status identification system within the all-wheel drive control unit evaluates such parameters as wheel speeds and steering angle. If necessary, nearly 100 percent of the drive torque can be directed to the rear axle.

The new Golf R is equipped with the ‘ESC Sport’ function as standard. The system is activated by a two-stage switch on the centre console. When the driver presses this switch briefly, Electronic Stability Control (ESC) switches to the ‘ESC Sport’ mode.

In very fast driving with lots of bends- such as on a race track- the ESC system reacts with a delay, which enables even more agile handling properties. When the ESC button is pressed for longer than three seconds, the system is fully deactivated for professional driving on a racetrack- this deactivation is only available in the Golf R and not in any other models of the Golf series.

With progressive steering, it takes 2.1 turns of the wheel (380°) to reach the end stop; with the standard steering system of less powerful Golf models it takes 2.75 turns (500°). The new Golf R is also fitted with the second generation of DCC dynamic chassis control. The DCC system adaptively controls the damper valves via a further developed and refined control algorithm for setting the damper characteristics. DCC takes input signals from wheel displacement sensors and accelerometers as well as vehicle information from the Chassis-CAN bus to compute these values and adaptively adjust the optimal damping force for every driving situation.

New in the Golf R is the Driving Profile Selector with an additional ‘Race’ mode. A total of five programmes are available: ‘Eco’, ‘Comfort’, ‘Normal’,’Individual’ and the special ‘Race’ mode that was specially tailored to theGolf R. All modes were specifically tuned for application in the Golf R.

In ‘Race’ mode, damping is increased (which further reduces movements of the body structure), and engine response and shift points of the DSG are configured to be even more dynamic. In the ‘Individual’ driving profile, the driver can individually combine mode settings  for the various single components. When in the ‘Eco’ driving profile, on the other hand, the engine controller, air conditioning and other auxiliary units are controlled for optimal fuel economy.

The DSG gearbox also gains a coasting function in Eco mode. When the driver releases the accelerator pedal -e.g. when slowing down to a traffic light or on route segments with descents- the DSG disengages  and the engine idles, which enables optimal utilisation of kinetic energy.

The extremely durable brakes were also adapted to the higher power levels of the Golf R. Here, Volkswagen uses a 17-inch system with internally ventilated discs and black brake callipers (with ‘R’ logo) at all four wheels. 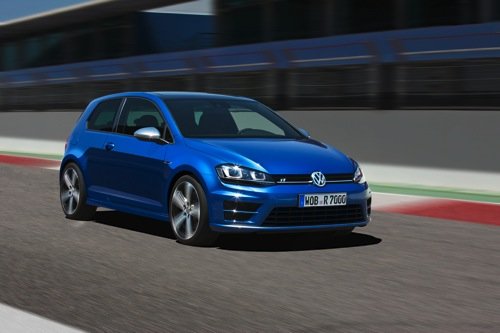 With the new Golf R, a successful concept has been transferred to the next vehicle generation – also design-wise. For the first time based on the Golf IV, the Golf R that is now presented emphasises the topic of absolute performance with its self-confident presence. Its status-neutral character and the typical Golf design constitute the foundation of the ‘R’.

The Golf R is an independent  product within the model range, with exclusive design themes and prized details. The design is integrative and makes for a seamless, all-of-a-piece look. Attachment parts are not perceived as such but as an integral part of the overall composition.

From the side, the Golf R is characterised  by newly designed 18-inch’Cadiz’ alloy wheels with size 225/40 tyres, black brake callipers with ‘R’ logo, side sill panels in ‘R’ style painted in body colour, ‘R’ badges on the front wings and ‘Matt chrome’ door mirror caps. Rear details that define the look of the new Golf R include smoked LED rear lights with a distinctive light-coloured  stripe in the middle, diffuser in’R’ design, four chrome tailpipes and an ‘R’ logo on the boot lid. 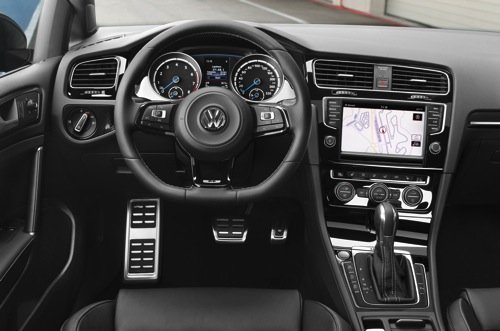 As in the three previous Golf R models, Volkswagen R GmbH has extensively customised and upgraded the interior of the new model as well. This most powerful Golf is equipped with what are known as top sport seats in front upholstered in Vienna leather, while an ‘R’ logo is embossed on the backrests of the front seats. The decorative seams are in ‘Crystal Grey’.

Leather is also used to trim the three-spoke sport steering wheel in ‘R’ design. Last but not least, the steering wheel’s lower cross bar has a chrome ‘R’ logo. Here too, all leather elements are upgraded by decorative stitching in the contrasting colour ‘Crystal Grey’.

The instruments and the start menu of the touchscreen on the centre console were also customised. To give a sporty feel from the very start, when the ignition is switched on the illuminated light-blue needles of the tachometer and speedometer  sweep once across the entire scale to the end pin – in the case of the speedometer to the 320 km/h mark. The instrument needles are also automatically illuminated as soon as the driver’s door is opened.

The touchscreen of the Discover Pro radio-navigation  system shows an animated ‘R’ logo as a start screen. Also new and upgraded with an ‘R’ badge is the accessory used to start the Golf R: the ignition key, specifically its case; it represents perfection in the smallest details.