BIBD today celebrated students and teachers of its ALAF programme with the handing over of certificates of appreciation to the ALAF task force, and a presentation of incentive rewards to PSR students who excelled in their 2015 examination. The certificates were handed over by guest of honor, Yang Mulia Haji Minorhadi bin Haji Mirhassan, Head of Government Relations and Special Projects. 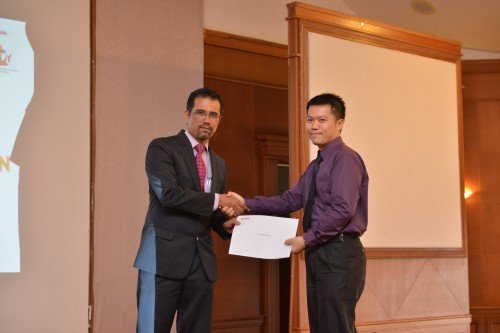 The event was held to appreciate the tremendous support given to the BIBD ALAF Programme by the ALAF Task Force, made up of officials from the Ministry of Education and the Ministry of Religious Affairs; in ensuring that the well-being and educational needs of the ALAF students, at primary, secondary and pre- university levels, are well taken care of. 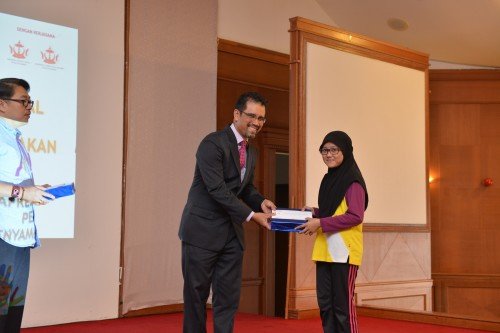 The collaboration has also progressed to development of beneficial activities and initiatives, such as the ALAF motivational camps, aimed to further develop a strong interest and a sense of appreciation from the students towards the ALAF programme. These activities are hoped to spur on their efforts in achieving more from their education, to provide them with the necessary skills required to prepare them for their future.

To further support the efforts of the ALAF programme, companies such as Syarikat Pustaka Remaja Sdn Bhd and Syarikat Teras Maju Sdn Bhd have come forward and contributed fourteen units of digital Al Quran as part of the HADIAH GALAKAN PSR for students who have excelled in their PSR studies.

Hjh Nurul Akmar, Deputy Head of Retail Banking at BIBD mentioned that, “Alhamdulillah, we are very happy to see the levels of support received from the NGOs for the students, in addition to the overwhelming support that was given during the Charity Expedition last year. I would like to take this opportunity to convey our sincerest gratitude to everyone for their contribution and involvement in ensuring the continued progress and development of the ALAF programme.”

To provide contributions into the BIBD ALAF fund and support the education journey of the ALAF students, members of the public may provide a minimum donation of B$1.01 into the BIBD ALAF account at 1018181811. Contribution can also be made through various BIBD channels such as the BIBD Online, BIBD Mobile, BIBD ATM and CDMs, and at BIBD branch counters. The public can also set up a BIBD Standing Instruction to ensure a monthly contribution into the ALAF fund. As an added option, BIBD account holders can also use their accumulated BIBD Hadiah Points for cash conversion into contributions into the ALAF fund account.

The ALAF programme provides the selected students with provisions for school and tuition fees, educational materials and welfare, as well as mentoring and counseling amongst others. All these efforts are meant to ensure the absolute commitment of these students towards the development of their education, and prevent them from being bothered by other commitments. The ALAF programme will also continue to provide support and assistance to these students until the end of their respective educational requirements.

Through ALAF, BIBD hopes to align its support to His Majesty’s 2035 vision of obtaining a 100% level of education for everyone, which in turn is hoped to help reduce poverty. In Shaa Allah, this will lead Brunei towards a more prosperous and peaceful future, making Brunei populated with educated, highly skilful and successful individuals, in line with internationally set standards.