The Ministry of Development through the Department of Environment, Parks and Recreation (DEPR) held a press conference this morning to socialize the addition of Thursday to the ‘No Plastic Bag Weekend Initiative’ towards No Plastic Bag Everyday. 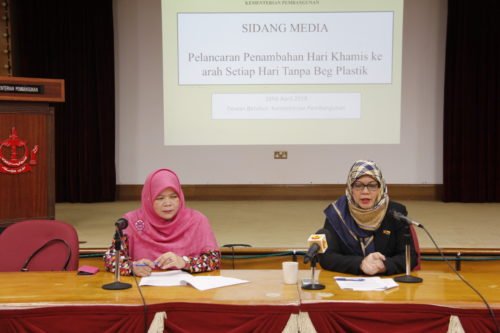 Present at the session was the Acting Permanent Secretary (Administration and Finance), Dr Nor Imtihan binti Haji Abdul Razak, who addressed members of the media with regards to the extension. In her speech, Dr Nor Imtihan shared that the launching ceremony will be held on Thursday, 19th April 2018 in conjunction with Earth Day 2018, which appropriately carries the theme “End Plastic Pollution”.

The Acting Permanent Secretary also shared that the remaining days will be added in phases with Wednesday tentatively to be included in July 2018, Tuesday in October 2018 and Monday to be added in December 2018 towards realizing the Government’s objective of No Plastic Bag Everyday by 2019.  The initiative will initially involve stores and businesses that are currently listed under the No Plastic Bag Weekend initiative but will be extended to other consumers of plastic bags such as retails shops (kedai-kedai runcit), restaurants and markets/stalls (gerai-gerai).

The No Plastic Bag Weekend initiative was initially launched on 26th March 2011 to include Saturday and Sunday, with Friday being added on 17th February 2012. The objective of the initiative is to promote the concept of 3R (Reduce, Reuse, Recycle) in order to minimize the volume of waste sent to the country’s landfill. To date, fifty stores and businesses have voluntarily registered to participate in the initiative.